Today we had the opportunity to see Claude Monet's Water Lilies at Le Musée de l'Orangerie in Paris. They are paintings of Monet's garden stream; a scene of water lilies convolved with reflections of the trees and clouds. They were painted with the intention of hiding the horizon from the viewer, given her an impression of "an endless whole". This is complemented by the sheer size of the paintings: eight 13-meter wide paintings span the eight walls of two rooms. The rooms are shaped as the two connected ovals for the symbol for infinity. It is easy to get lost in these brush strokes. Monet started painting from his home in his later years, and produced around 250 of lily paintings. Amazingly, it's still possible to visit Monet's gardens today, about an hour out from Paris. Searching around the gift shop of the exhibition today, I noticed a postcard of Monet posing with the motivation of his lily paintings. It seemed peculiar to me that in this particular photo, no lilies exist, and the trees are shorn of leaves. The wintry condition of his garden is never a subject in his paintings. Why not? He spent nearly thirty years painting lilies, yet this scene does not occur in his paintings, to my knowledge. 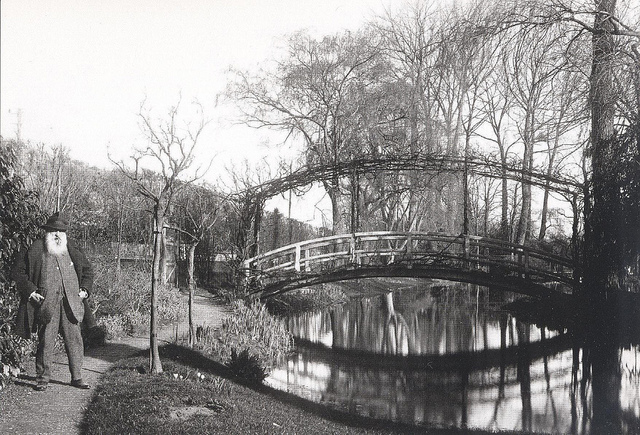 I bought the postcard, because at the time it struck me that Monet was the vehicle for transcribing the scene behind him onto the canvas. Through his eyes, it was always spring. Or maybe, less romantically, he chose to stick with lilies because they provided the necessary conflict with the depth of the reflection to bring life to his paintings. It would be a fun project to imitate the style of Monet's lilies, but for a winter scene. A fun parody, with dead ducks and bare branches.

The painting at the top, titled "Les Nuages" or "The clouds" was my favorite, for it best captured a large reflected scene without showing us what is being reflected, forcing us to make educated guesses. Somewhere else in the museum, I saw a photo of the same painting in black and white, and thought it was as striking in dynamic range and suggestion as the original.

Excellent Post...I must thank you for this informative news....
This is my first time go to see at here and i am really pleassant to read
all at one place
Packers And Movers Hyderabad