I just got back from a wonderful trip around Europe with my fiancee. At one point, we made the trip down into the Paris catacombs, where the remains of 7 million humans are neatly stacked. 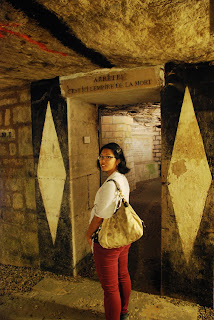 "Stop -- It is here the empire of death", at the underground entrance to the ossuary.


The bones of men and women used to be buried in the consecrated grounds of churchyards -- a requirement for a soul's passage into heaven. This was a large source of revenue for the church, so when they started running out of space, they introduced the concept of mass graves. When those started filling up, the decomposed bodies from older mass graves would be excavated, and the bones collected into piles so as to save space. Eventually, the government stepped in and created the catacombs to store the bones from Paris' churches. (wikipedia)

As we walked the mile-long bone-lined walls of the ossuary, I couldn't help but to feel injustice for those who thought their bodies would rest in peace (just 200 years ago!). The natural conclusion from this line of thought is that burial is not enough to guarantee peace. So what are the other options?

When we emerged back into the streets of Paris, I was left with only one petrifying thought: I want to be a fossil. Technically, a fossil is any preserved specimen older than 10,000 years. Hence if I become a fossil, I achieve my goal of remaining undisturbed for quite a long time. So, how do I go about actually planning this? What instructions do I leave in a will?

Find a place to die, preferably in sandstone which is growing, not eroding. Once you have found the ideal place, dig a deep grave, and request for your body to be buried inside without a coffin (unless you want the fossil to look like your coffin). Make sure you are lying flat, so as to minimize the distortion of your body as the earth around becomes distorted. Cover yourself in silicon dioxide before burial, and make sure your burial grounds has some rain, so that hard water will slowly seep into your body, depositing minerals into every cell, leaving you between a rock and a hard place.

It's not immediately obvious to me why this has to take a long time. A pound of silicon dioxide is like 12 bucks on amazon. Okay! Proposed experiment: find an recently deceased leaf, cover it in mud, and slowly poor water saturated with silicon dioxide on it. If my espresso machine needs to be descaled of calcification every year, we should get a fossil leaf in no time! Seriously, I bought the silicon dioxide (it's a spice?). I'll post again with results soon.

In reality, it sounds like my chances of ever achieving fossilhood are fairly slim. Of course, if I allow some bending of the rules, a fossil can also be any mark left by an organism, like a footprint. These are called trace fossils (as opposed to body fossils). A small stretching of this definition suggests I just need to make a strong enough impression on human-kind to affect change lasting 500 generations. Better get to work! 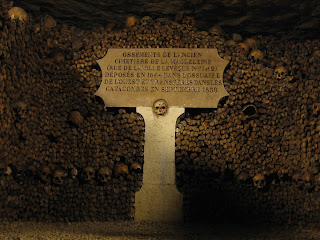